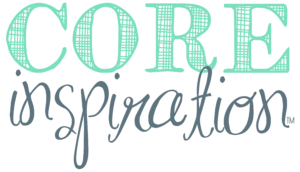 This week, we celebrated our knowledge about measuring length in our First Annual Measure-Thon!

This multi-day math simulation was the highlight of my second graders’ school week. I was so amped when they made giddy little back-and-forth hand movements each morning when they saw “Measure-Thon” written on the schedule.

I am a huge fan of making math as interactive as possible and simulations are the perfect way to bring math to life. It has taken me a while to get my feet on the ground in second grade so this is the first simulation we have done all year!

Here’s the run-down on Measure-Thon.

When my second graders walked in from recess, they were greeted by a sign reading: “Mathletes, today, you will be competing in four measuring events that will test your physical strength and your mental power. As you compete today, remember to be honest and accurate, and display good sportsmanship.”
At the back of the room, these Event Signs were on display along with a collection of equipment in the Locker Room. 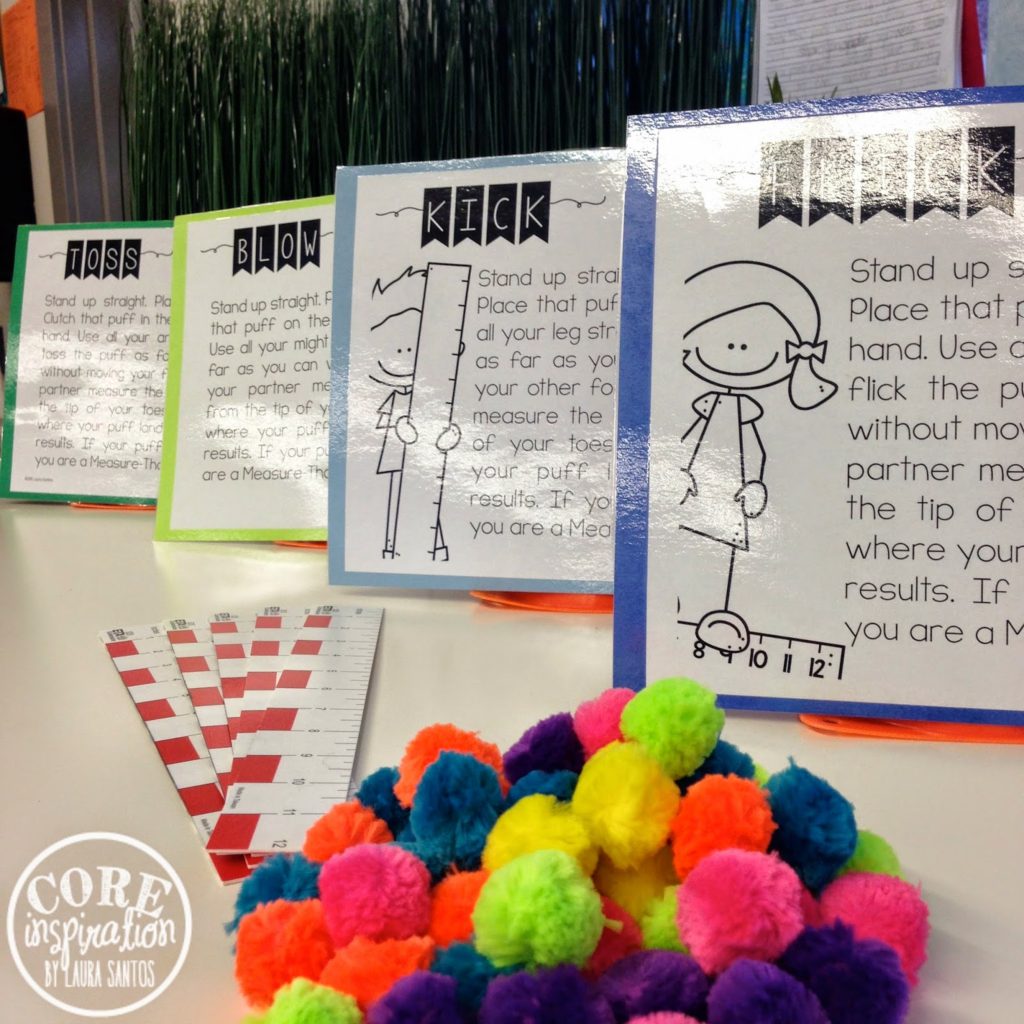 Once my students settled in, we did our Warm-Up. During this portion of the simulation, volunteers demonstrated each event. We worked together as a class to accurately measure and record their results.

My mathletes caught on pretty quickly so we previewed two of the four events. For the other two, I simply read the instructions and had a student model the proper physical posture. The goal of our Warm Up was to solidify the expectations for accurate measuring and recording and give my mathletes a visual of what each event looks like.

During the quiz, I gave them each a paper, set the timer for 1 minute and had them count by 12s as quickly as possible to get to the highest number possible. They then flipped their paper over and repeated the exercise while counting by 30. This helped me determine my Measure-Thon Teams. Each team had a skilled counter and a not-so-skilled counter to reduce the number of obstacles the teams might encounter when competing in the official Measure-Thon the next day.

We used tape measures during this year’s Measure-Thon so the students could focus more on accurate measuring and less on adding 12’s and 30’s multiple times.

We started with a brief review of expectations for the competition and created a reference poster during our discussion. Each mathlete met their teammate, gathered their equipment from the Locker Room and headed out to their first station. 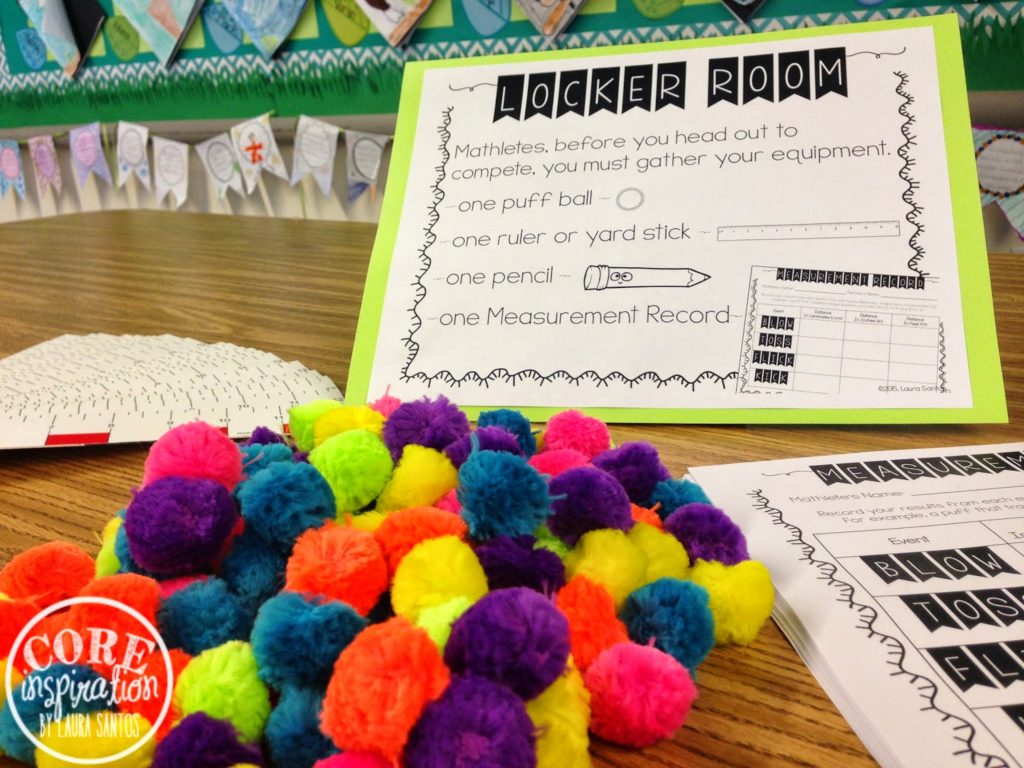 I anticipated it would take my mathletes between 10-15 minutes for each station. To my surprise, it took them thirty minutes to complete their first station…then I remembered…I teach second grade. After that, we had a short meeting about efficiency.

They finished two more stations within the next half hour – whew! We made the decision to complete the final station the next day since we were all experiencing measurement exhaustion.

The use of tape measures sped up the measuring process notably. All four stations were complete within 30-45 minutes. 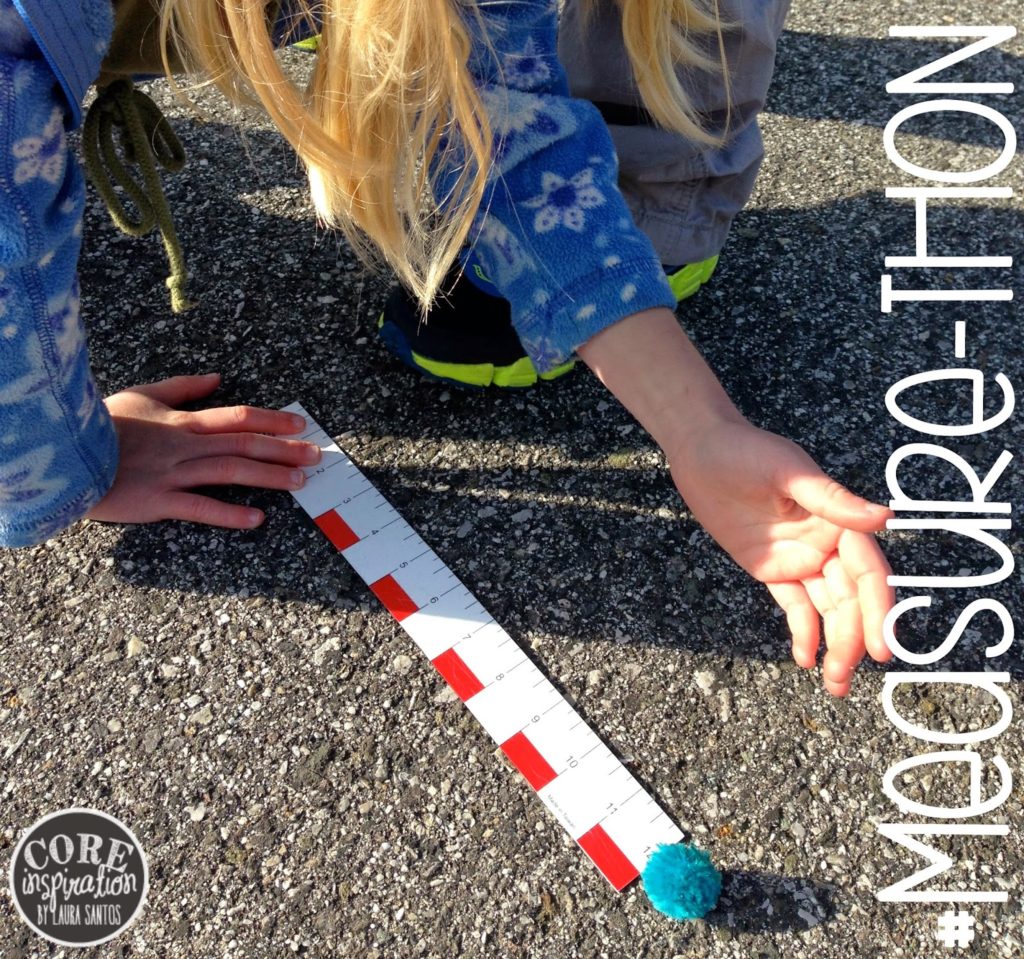 My mathletes headed out the door just as energized as the day prior and completed their final station within 10 minutes (learning curve much). 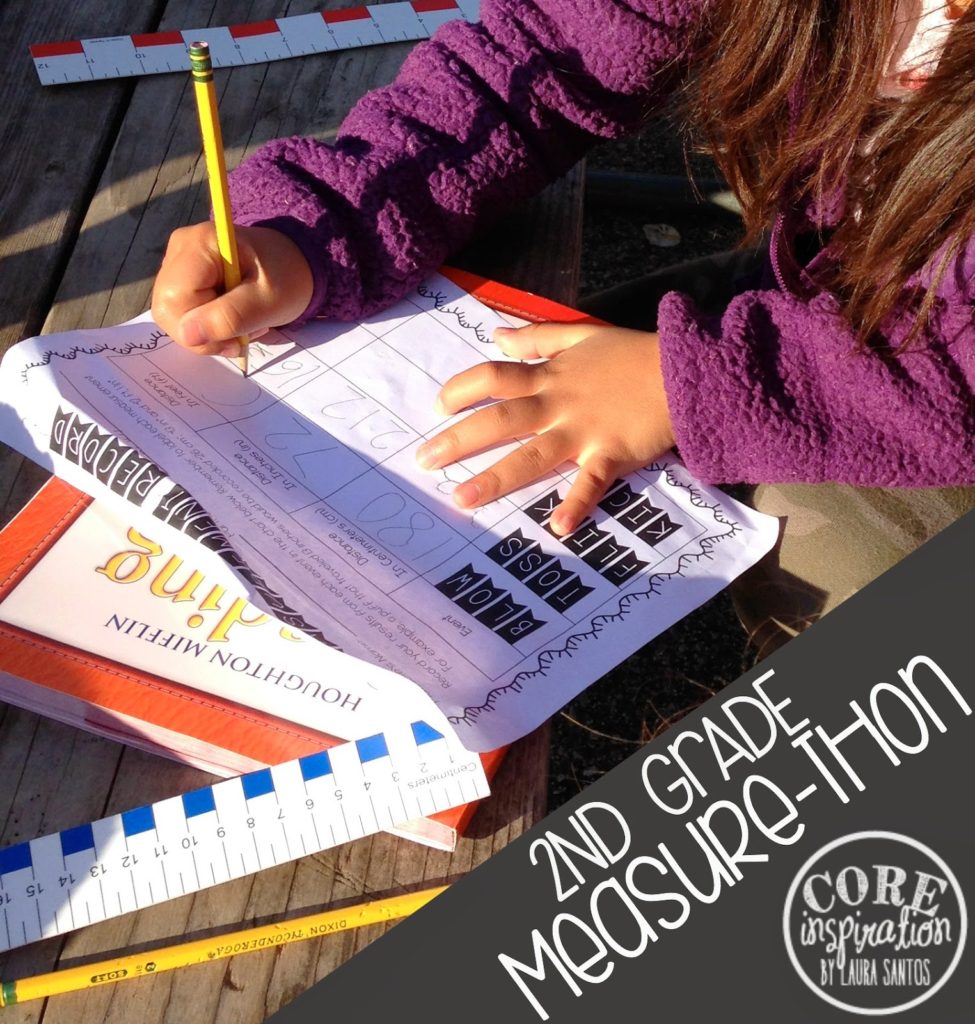 Back inside, four blank graphs hung waiting to be filled with data. We took a moment to vote on which unit of measure we wanted to graph (inches was the final word) and discussed which scale would be most reasonable (counting by 5s). 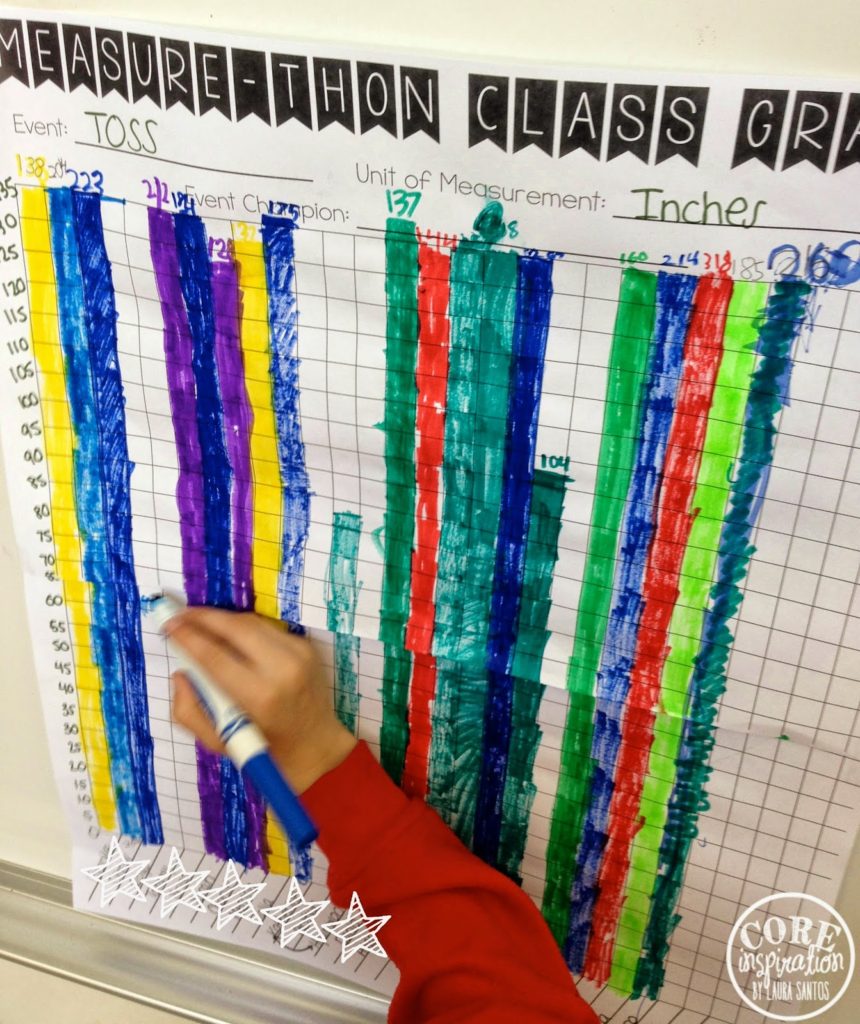 I did a brief demo on graphing and sent each mathlete to their seat to work on their Team Meeting Notebook while they waited for their graphing opportunity.
This Team Meeting Notebook is stocked with questions that required in-depth problem solving and explanation of math reasoning. Each question requires students to use their own unique data from the competition, which really boosted their engagement. 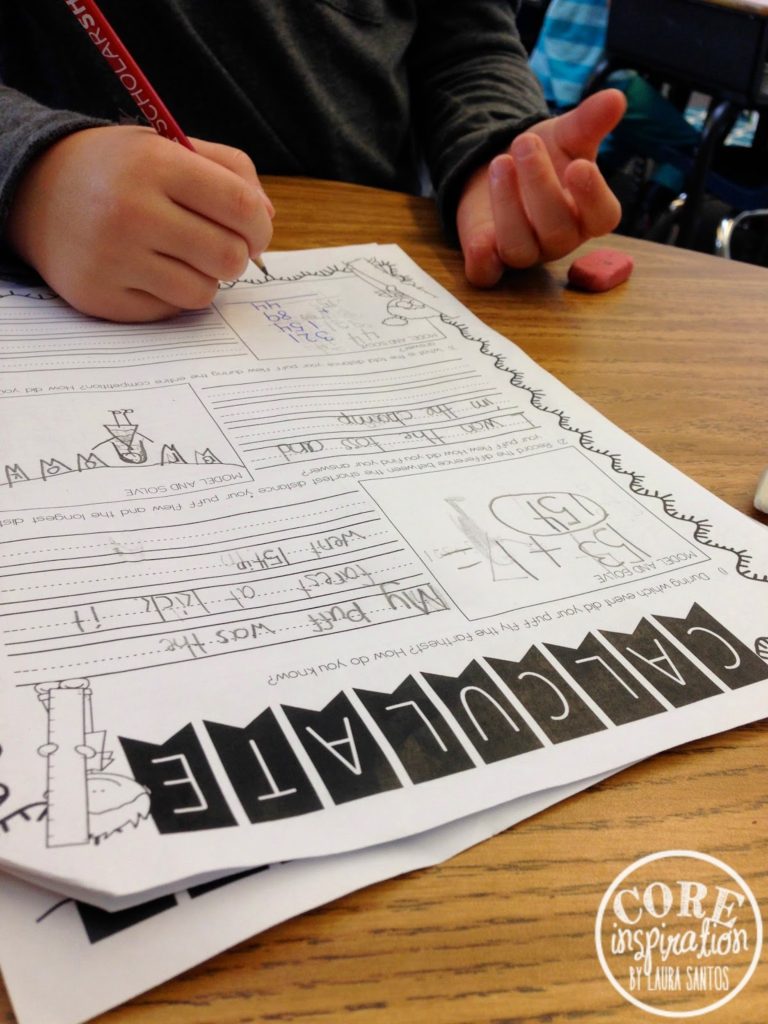 When the graphs were complete, and the students headed out to lunch, I determined a winner for each event and filled out their certificates for the Awards Ceremony.

During the Awards Ceremony, our event winners were announced. The announcement of the most coveted award, Measure-Thon Champion, lead to a heated debate with great opportunities to use muti-digit addition to prove who the true champion was. 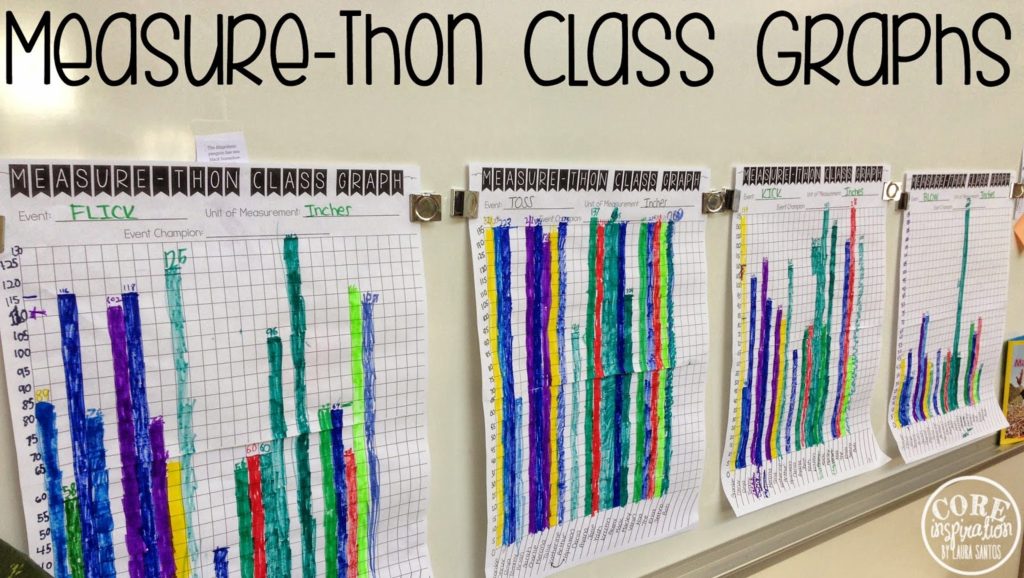 The buzz about our Measure-Thon is spreading on the playground and our other second grade classes are anxiously awaiting their own Measure-Thon events in the coming weeks.

My mathletes decided the graphs were too cool to take down, so we decided to make a display board. The graphs are surrounded by each student’s favorite page from their Measure-Thon Notebook (redone for wall-worthiness) so the memory of this successful simulation can live on for a few more weeks.

If you are interested in hosting your own class Measure-Thon, this entire simulation is available in my Teachers Pay Teachers store. 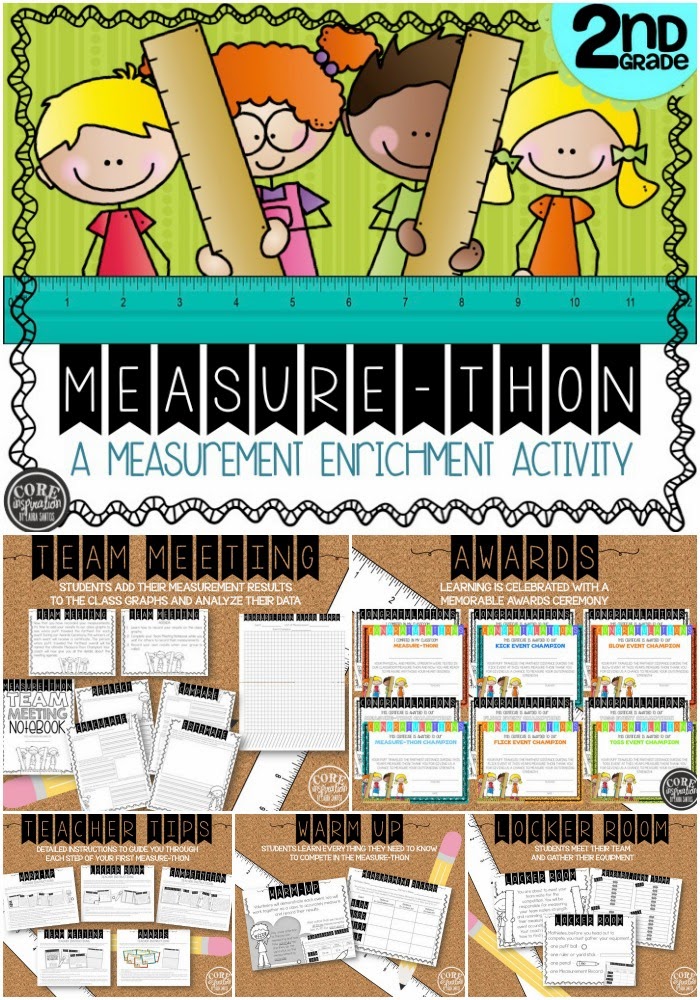 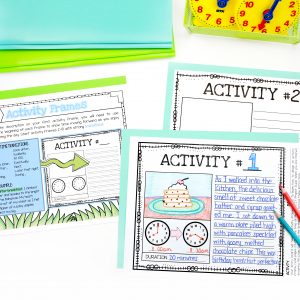 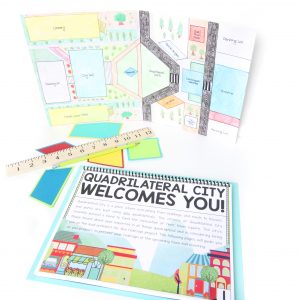 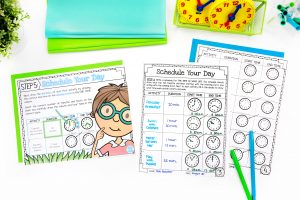 A Telling Time Math Project with A Narrative Twist

I’ve been an elementary teacher for ten years, and love sharing tips and resources that make differentiated learning more manageable for you. Thank you for visiting.

Looking for something specific?

Check out these posts

A Telling Time Math Project with A Narrative Twist 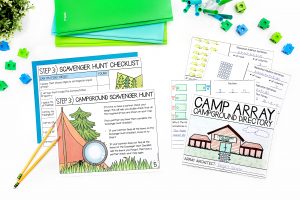 inspiration in your inbox

Dropping by with weekly tips, classroom strategies, and free content created with you in mind.

Find what you need

Join me and other 2nd through 4th grade educators in the Teaching with Core Inspiration Facebook Group.  This is a place to collaborate, ask questions, and learn how teachers like you are using Core Inspiration resources in their classrooms. Hope to see you there!

Menu
We use cookies on our website to give you the most relevant experience by remembering your preferences and repeat visits. By clicking “Accept”, you consent to the use of ALL the cookies.
Cookie settingsACCEPT
Manage consent

This website uses cookies to improve your experience while you navigate through the website. Out of these cookies, the cookies that are categorized as necessary are stored on your browser as they are essential for the working of basic functionalities of the website. We also use third-party cookies that help us analyze and understand how you use this website. These cookies will be stored in your browser only with your consent. You also have the option to opt-out of these cookies. But opting out of some of these cookies may have an effect on your browsing experience.
Necessary Always Enabled
Necessary cookies are absolutely essential for the website to function properly. This category only includes cookies that ensures basic functionalities and security features of the website. These cookies do not store any personal information.
Non-necessary
Any cookies that may not be particularly necessary for the website to function and is used specifically to collect user personal data via analytics, ads, other embedded contents are termed as non-necessary cookies. It is mandatory to procure user consent prior to running these cookies on your website.
SAVE & ACCEPT